Oxygen and its Isotopes 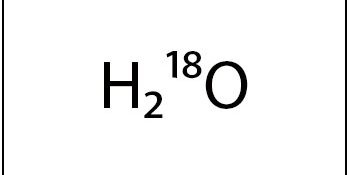 Oxygen and its Isotopes

Oxygen is among the prevailing elements in live cells and in live bodies, and a key element in the life activities of the live world. Natural oxygen consists of three stable isotopes – O‑18, O‑17, and O‑16, which exist in nature in the ratio of 0.204 % at., 0.037 % at, and 99.759 % at., respectively. Both 17O and 18O isotopes have many applications in different fields of sciences, but in this blog, we will discuss the usage of O18 isotope in medicine, environmental studies and chemical synthesis.

Today PET diagnostics finds wide application for diagnostics in neurology, oncology and cardiology. The diagnostic substrate F‑18 – fluorodeoxyglucose is made from the fluor‑18 isotope obtained from water enriched with O‑18 isotope (Water-18O) in cyclotron. 18F-fluorodeoxyglucose is used at molecular level to detect pathological changes in the patient’s body at an early stage of oncological, nervous and cardiovascular diseases.

​Increased interest in PET is explained by its wide possibilities in medical diagnostics and approachability in use. Positron emission tomography is a new unique means, providing opportunity to determine precisely, quickly, non-invasively any pathology in neurology, oncology, cardiology, endocrinology, etc. in ambulatory conditions. In contrast to classic methods of examination (X-ray, ultrasonic, computer and NM tomography), which show the body organ structure and its changes PET precisely record preceding phenomena – changes in metabolic processes. PET enables to disclose the earliest possible pathologic shifts far before morphological changes occur, which is especially important in the diagnostics of tumors and metastases, inflammation processes, myocardium, epilepsy, and a lot of other diseases. In particular, PET is the only instrument in the world, which provides opportunity to disclose malignant tumors at the so-called “zero” stage.

Here is the synthesis route for 18FDG with the starting material Water-18O (H218O).

Another major use of O-18 isotope is in environmental researches. Measurement of δ18O, which is the ratio between the Oxygen-18 and Oxygen-16 isotope, can be used in geochemistry, paleoceanography, Paleoclimatology. For example, using this ratio scientist can learn about the climate changes which happened in the past. Furthermore, 18O isotope I used in the study of plant photorespiration where oxygen uptake can be measure using by labeling the atmosphere with oxygen-18 isotope.

Applications of O18 labelled water and oxygen in scientific researches

During the chemical and pharmaceutical research, the labeling of chemical compounds with O18-isotope helps scientists to easily determine the mechanism of different reactions and study the biochemical processes which happens in our body. One of the example of this is a determination of the mechanism of Fisher Esterification:

Currently, CPI Georgia deals with the production of substances, enriched with O‑18, O‑17, N‑15 isotopes for medicine, science and technology. Water enriched with O‑18 higher, than 98 at. %, used for PET diagnostics is one of the main products, manufactured at the Department. Developed synthesis technologies exclude any side reactions, which provides high purity of obtained labeled compounds and minimum isotope losses. All the stages of synthesis proceed in closed‑loop systems, which eliminates possibility of isotope dilution and contamination of highly enriched products with components, penetrating from the external environment. 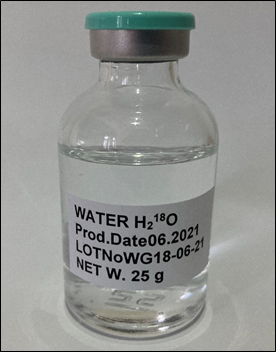 For specification of O18 water see the attached file.